How would Qingdao be different from other Chinese cities, you wonder?

Well some things come to mind. But for today, let me give you only this one reason, which I found out about lately.
That day I was meeting my friend at Shílǎorén Beach in Láoshān District. I started the day off with a 火烧, a very tasty bread that I found in a shop in the metro station.

The famous beach of Shilaoren was close by and even though winter there were beach vendors selling over-sized potatoes （大土豆） and corn （玉米）. The day was chilly cold though and not many seemed to be lured outside. Hence the beach was perfectly lonesome yielding an easy, somewhat romantic atmosphere. 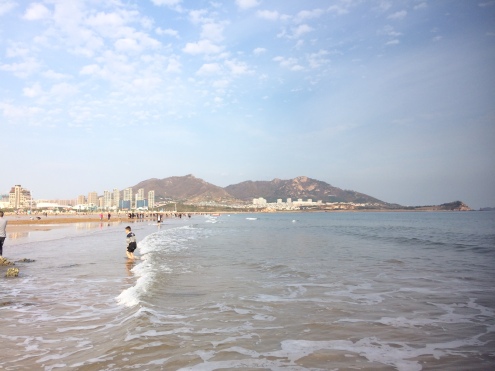 There was a little lagoon too, which unluckily turned out to be all muddy when trying to pass through. Headed westbound we entered a cozy beach promenade allowing for a good view over to far islands on the horizon as well as to Old Stone Man. Can you see him over there (on the very right edge)?

Walking on we passed by the reefs-lined coastline, well-designed gardening as well as no
less a figure than philosopher Laozi (Tao Te Ching).

This hall （青岛雕塑艺术馆） exhibited even more local philosophers and men of honor, and we learned one free lesson of Chinese culture ; -7

Getting it fed here bit by bit, learning Chinese didn’t seem difficult at all.

To our right hand side Fushan Mountain（浮山）accompanied us continuously. 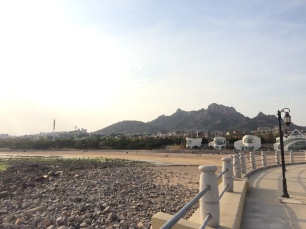 Here we reached this exceptional piece of modern art. Or should I better say historical landmark, because it shows seamen arrive at Qingdao?

What’s this caption about? : 大爱无疆(literally: Great love is boundless).

Outside again, we shortly bumped into these Chinese lanterns that were yet to get dispersed along the shore. By the way, what do those five steel men do in the meadow?

Later on we also found these god-like figures, with one seeming utterly bizarre…

… as well as these former fisher family.

We ended our trip at Qingdao’s Ocean Park – a scenic, family-friendly area with playgrounds, outdoor workout facilities and even a sea lion compound open for public viewing (find pictures here).
For the ones who aim for more, the Underwater World （岛海底世界）and the Polar Ocean World are just next by.

So Qingdao is located on the ocean, the Yellow Sea in fact. But so are Shanghai, Ningbo, Dalian and many others. So, what’s special about Qingdao after all!? Well, this continuous educational trail was. Learn about China!

Overall this trail seems to be one of the many remains of former German influence, as the sea walk reminded me just of the ones at the German Baltic Sea.

How is living in Qingdao?

Drop by soon to find out about the second stage, which will be from the Old Railway Station （青岛站） to May 4th Square （五四广场）!